This CTF was originally created by Mr. Shizzy, using some resources from some other modders on the scene. I made a few modifications to it. Including creating a new opening_plugin.rco. I also added a custom coldboot sound, new gameboot, color changing battery icon (based on battery life), changed the system update from HEN Update to the stock "System Update", a custom volume bar (doesn't show up in Adrenaline), custom USB Mode transfer animation, added custom red PSN icon by dmaskell92, as well adding as a set of modified background colors by Paolok 95.

Mr. Shizzy's original name for the CTF was PS3Style+. My modded version is called PS3Style+EXP. 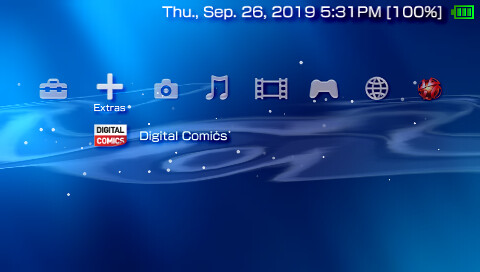 Here's what Mr. Shizzy wrote about it his original version:

Here is another .CTF I made for my own personal use, that I have now decided to share.

There is not much to explain here.. I shrunk the XMB down, so all columns fit on screen at once. Then added the PS3 wave and sparkles by patpat/Z33... That's it! Simple but sexy.

Then I made a second version of it. If you use the PS3 Style+ theme, then the wave/sparkles will show up over any pic you set as a wallpaper.

I called it "PS3 Style", since it is not a all out PS3 theme, but it is still very similar. Enjoy!

The only problem I have always had with PS3Style.ctf is that it's laggy as heck when I use the PS3 wave on every PSP I have ever tried. -_-

Is this one laggy too?
Advertising

Yeah I don't find it laggy at all. However, I think I read in one of your other posts that you don't tend to max out your CPU to 333/166. If I had to guess, that's why you're experiencing lag. One of several reasons why I own a couple of Sony Extended Life Batteries.

If you wanna test it out, just set your VSH CPU to 333/166. I doubt you'll experience any lag at all at that point.

Yes, that is true that I never overclock my PSP above default (to save battery). I always have speed up ms enabled.

I'll try the theme. If it lags on default then I probably won't continue using it (I really don't like overcloking. It shortens my battery life and makes my hands incredibly hot and sweaty because it generates more heat). Yeah, with the original PS3Style.ctf, if I did overclock my PSP it wouldn't lag so I'm guessing it'll be the same for this.

Wow, surprisingly this theme is not lagging on default for me. The original does, but this one doesn't so I will use it after all. Thanks for modding this theme and somehow fixing the lag that once haunted this theme for me.

Oops didn't even know there was a themes subforum!

And you're welcome! Glad that works out for you w/o any lag. Whatever I did during the modding process of the theme, def wasn't an intentional fix lol. I really wasn't even aware that the original had lag issues, as I always overclock my PSP. So looks like I may have fixed something by accident hah.
PSP Star Wars 2001 TA-085v1 32GB 6.60 ME-2.3
PSV 1001 3G 64GB 3.60 HENkaku Enso
PSTV 64GB
Top

The link is broken