Play that card game on your favorite devices

I just got an idea that I wanted to share with you. Not all sets of MtG are supported by the official release. But there are alot of cool cards in sets, that are only available here on this board (because there are only a few cards from their sets coded).
What if we would build a "Wagic 1st edition" with cool cards from all kinds of sets?
249 cards:

We could do some polls for the mythics and rares and so on. I would edit the cards with the magic set editor, using the old artworks, but the pre 8th edition frame...So we'll see some old cards in new style. For the official release, we would leave the set without the pics. I also would come up with a cool Set logo.
Just to be clear: This would contain only cards that are codeable and already exist in non-featured expansions.
What do you think? This would be community-work, so if everyone totally hates the idea, I guess it wouldn't work

What would be great would be to gather all cards from beta,alpha, 4t, 5th,6th,7th,8th and 9th edition (also core set) and duels deck that are not included in other release and prepare a kind of pre-10th edition release for the official release... with naturally images redone ...
Because all extension could be included in the official release at a certain point of time, but old core set will not... and probably the duels deck will neither (since they are mostly reprint of other set)....

Would need some work to spot all this cards...

Abra
We need your Help !!!
New to wagic ? Be sure to check the following :

Jup, that's basicly what I mean: Add cards that would never be featured to one set.
btw, just found some great altered art versions (officialy by WotC, been some prizes for Worldchamps or something like that) of some of the P9:

I'm all for the original cards, but aren't they a little overpowered.
How about something a little tamer that is still workable and highly useful.

And how about putting in one for the combo decks, tinker.

its effects are already coded in the game but on separate cards. One are the artifact 1/1 for "2" that you can sacrifice for "4" and put an artifact from your hand into play and a planar portal which is a "6" and for "6" and tap searches your library for an artifact card.

I wonder if metalworker and phyrexian processor are able to be coded in with our current system.
Top

I've been actually thinking the same thing! Since you proposed it first I'll leave it up to you, but I think it would be cooler if we use the future sight style cards. I just think those cards look awesome.

Just in case you didn't know what they look like:

Something else that would be cool would be leaving out all of the really crappy monsters (like some stupid monsters that cost 5 mana but are only a 4/3, and cant block) and instead putting some of those ultra-rare promo cards that they give out at tournaments and stuff. They are actually legal to play (alteast in extended, dont know about the other formats). I've always wanted to get my hands on one of those, if somebody could find some pictures of them that would be awesome.

It would be cool to call it Wagic edition. Or zero edition. Something like that.

As for the mythic rares, I think what they call the "power nine" (Black Lotus, Mox Pearl, Mox Sapphire, Mox Jet, Mox Ruby, Mox Emerald, Ancestral Recall, Time Walk, and Timetwister) should be mythic rares, in order to compensate for how over powered they are (they are called the Power Nine after all). 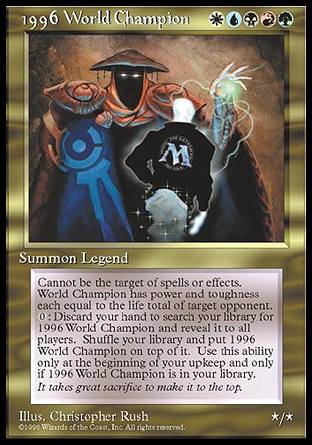 lol. This is actually a real card (i don't think its legal tho) that wizards custom made for the 1996 world champion. Obvious this card is too powerful and ridiculous to include, but if we found some reasonable ultra-rare cards like this to add in that would be awesome. There are some cards out there where only a few hundred exist, that they gave out as consolation prizes and things like that. Most people probably have them in some Plexiglas case somewhere.

Now heres one we have to throw in! Only 1 copy of this card exists in the world. It resides at some recreational center or something in japan. Its really not even overpowered. Seems like a fair effect for such a high mana cost. 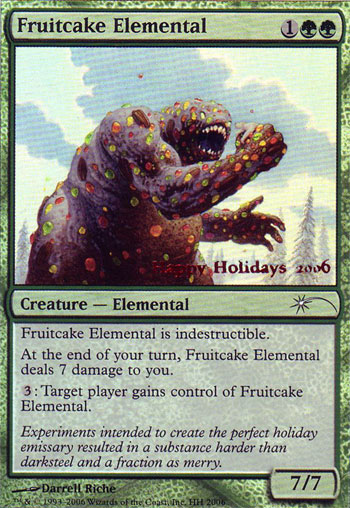 This is a real one too, which was given away to employees of wizards of the coast around Christmas.
At first it seems over powered because its a 7/7 indestructible that costs 3, but it deals 7 damage to you every turn, so its sort of balanced. Would make a good mythic rare, what do you think?

This is another one of the christmas cards they give to employees. This one is bizarre because it has you put another players cards in your hands, which could cause forgetful people to walk off with another persons cards! Of course in wagic, you don't have to worry about that. So this would be another sweet card to include.
Last edited by mickey_brown on Fri Oct 02, 2009 10:04 pm, edited 1 time in total.
Custom Sets/Images:Zero Edition, 10th Remastered, Alpha Remastered.
Top

These cards are funny, but I don't know if we will be able to code them. I'd prefer cards that exist already here on the boards but are unlikely to be featured in the officially release (like from Editions where only 10 cards are codeable and which are unlikely to be featured in the near future). I'd also try to keep the power level balanced... (of course, the P9 are overpowered, but they'll be mythic and expansive). Anyway, I'd also like the idea of "reprinting" cards that already exist, if there are some altered artwork of them out there. For example: Also, I don't really like the future sight style at all^^ I hope it'll never become the next official style. But thats a matter of taste.
Top

kaioshin wrote:I don't know if we will be able to code them.

I see. Well I could write the code for the cards I listed. All of them look easy enough. I've been coding my own set, but I can take some time out to code those. Especially the dragon (its not that great of a card, its decent, but the fact that only 1 in of it exists in the word means we have to put it in. There is no other way for us to play with it). I think gifts given is an awesome card, tho it is really strong, but not nearly as strong as Ancestral Recall, it should fit in fine as a mythic. I can understand why you would be skeptical about the elemental, but while its context is humorous, the effect is serious, and well balanced. The card presents a huge trade-off, but I could just imagine building an entire deck around it. I think some people liken it to an unglued or unhinged card, but there are a lot of humorous magic cards in the real sets (like the goblin cards that make fun of how stupid they are). The difference is unglued/hinged is humorous in both its flavor context, and the cards effects (rip the card into pieces, pick target artist, ban a certain word, insult you opponents creatures). Fruitcake elemental is kinda like yavimaya worm (who's context reads "when the gorilla playfully pulled on the wurms tail, the worm playfully bit the gorillas head off"), its funny but but its not stupid. Its pretty strong, but I think with the 7 damage a turn it has balance to it, and even more so if you make it a mythic rare. As for the 1996 champion, that cards is just ridiculous.

Thats why I think it would be awesome to include those ultra-rare cards, there sets will never be included into wagic, cuz they only have 1 to 3 cards in each set!


kaioshin wrote: I'd also like the idea of "reprinting" cards that already exist, if there are some altered artwork of them out there.

Just about every alternate art can be found here:
http://www.magiclibrarities.net/rarities.html

For cards that you want to remake that dont have official alt art, you can go to sites such as
deviant art and get pictures from there. Most of the users on there (such as myself) put there art under the free creative commons, meaning that as long as you give them credit (put there name as the artist at the bottom of the card) you can use it. In fact, any of the images that are under creative commons could technically be included in the regular wagic release, since there creators put them out there for people to use freely and legally. For example, if you need a picture for some dragon card, you just find an awesome picture of some angry dragon under creative commons.


Something else that would be cool, that I could code if you would like, are some other rare cards I found on the gatherer. These cards were only available in certain starter kits or limited editon decks:


They are all real and tournament legal cards that wont make it into wagic any other way because they aren't part of a set, don't appear in boosters, and don't even have foil versions. But as you can see some of them have good effects that make them worth playing. They would fit in perfectly with a custom edition.

kaioshin wrote: Also, I don't really like the future sight style at all^^ I hope it'll never become the next official style. But thats a matter of taste.

Yeah I know there's a lot of hate out there for it. I remember when the modern style came out and nobody liked it. Now everybody likes it and hates future sight, soon everybody will like future sight and hate whatever comes next.
Custom Sets/Images:Zero Edition, 10th Remastered, Alpha Remastered.
Top

cool cards. btw, I know about deviant art, I have an account there, too...


mickey_brown wrote:Yeah I know there's a lot of hate out there for it. I remember when the modern style came out and nobody liked it. Now everybody likes it and hates future sight, soon everybody will like future sight and hate whatever comes next.

"...However, it has been confirmed that the Future Sight frame will not become the norm for subsequent sets..."

Anyway, thanks for helping me on this. We should start a list or something like that...
Top

kaioshin wrote: "...However, it has been confirmed that the Future Sight frame will not become the norm for subsequent sets..."

I see. Personally I think It would b cool if they came out with a new design for the cards every block, it would add more variety to the look of the game.

kaioshin wrote: Anyway, thanks for helping me on this. We should start a list or something like that...

Well like I said, I was already thinking about this. No sense in us not working together.

When I get some time to really sit down, I'll do all the ones I listed using the magic set editor, and ill write the code for them.
Gifts given is the only one I listed that I wont be able to code.

here are some more rarities I found on the gatherer that I'll code: