Hi, I decided to update the uOFW module installer since the current one is outdated (around a year old-ish) and it installs 6.60 PRO-B10 by default before allowing you to install your own custom modules. Addition features were put in as well.

uOFW Module Installer allows you to install and load your own custom modules to flash0. It's useful if you reverse engineer an official module, recompile it and then want to check if it runs properly. On the other hand you can also make it do whatever you want it to, which can be interesting in some cases.

On the other hand it is also useful if you want to run a custom module after a specific one (For example say you want "dummy.prx" to run before "usersystemlib.prx" in the pspbtcnf module).

This is aimed more towards the technical side of things. A lot of stuff might be misunderstood or not understood at all. So it might not mean much to the average user. D:

The binary as well as the source is provided below. This was patched so it only supports 6.60, with any model.

Here's a run down of the boot process (Taken from the current uOFW readme).

the list.txt file inside of the "uofw" directory which is inside of the bin folder is your bread and butter for this to work.
The following is an example of what the list.txt looks like if you wanted to replace the official copy of led.prx with your own.
Also it shows how to have a custom module (dummy.prx) run before usersystemlib.prx. 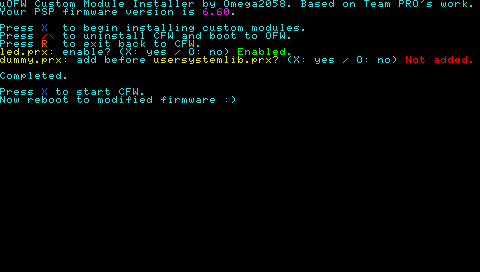 I modded a module reversed by Almost (led.prx) that can be tested to see how it all works (it turns the WLAN and MS2 LED's on permanently), just run the Installer and enable it. Also, a picture is provided below. 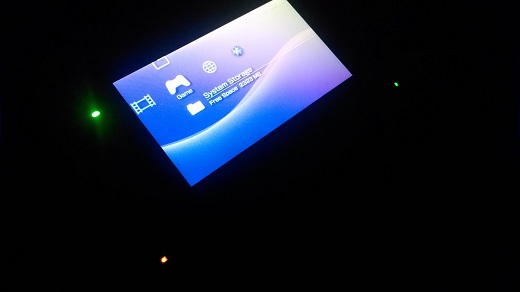 
Sources and stuff:
---------------------
*) The folders you need to be looking at respectively are "./Installer" (The installer menu),
"./PXE/SystemControlPXE" (Sets up configuration and applies patches),
"./PXE/RebootexPXE" (The actual Reboot Extender),
"./PXE/Launcher" (The PBP which launches the exploit).

*) The source is pre-set to make it easier for people who wish to try and compile the thing on their own, so if you ever want to make changes to the menu, go to the Installer folder, modify, recompile, gz it, bin2c the gz copy, drag it into the Launcher folder, make clean, make and you're done.

NOTES:
------------
*) If this installer does NOT work, try again using the original installer included in the binary, otherwise ignore this. This confirms whether it's an issue with the installer itself and will help with bug fixing in the future.
*) Modules which have been installed will still running when launching games/homebrew
*) For those who want to take shortcuts, resetting the VSH/suspending the device won't cause the custom modules to unload themselves
*) Resetting the device will unload everything (Also will put you back in OFW if you don't have CIPL)
*) If you're worried your module won't work and you accidently install it, in most cases the PSP will just freeze up on you so you can try again
*) Until I talk to Felix/artart, this won't be in the main repository.

Credits
--------
The PRO Team and the uOFW team for all of their work thus far to make this possible.

Awesome, thanks for sharing.

I just tried it out with ctrl.prx from the master branch on uOFW repo, froze my PSP 3000. D:

Edit:
the led.prx you provided doesn't work for me either, just stays on a black screen after rebooting.

Oops, the led.prx I modded was only for the PSPGO. I meant to use the original in the binary.

ctrl.prx is listed under working status, but it also freezes for me too. Both on the old installer and this one as well. Someone goofed.

Edit: Reupped the original non-modded led.prx in the binary, it should work as intended now ( Hopefully D: ).

The controller module (ctrl.prx) is indeed supposed to be working. That's quite some odd news both of you provided. I'll look into this issue once I have some free time, expect an update in this thread here as soon as I got some results.
Top

Felix-Dev wrote:The controller module (ctrl.prx) is indeed supposed to be working. That's quite some odd news both of you provided. I'll look into this issue once I have some free time, expect an update in this thread here as soon as I got some results.

Thanks for letting us know about that. Since you made changes, can you try with this installer? I want to smooth out all the bugs if any exist.
Top

Omega2058 wrote:Thanks for letting us know about that. Since you made changes, can you try with this installer? I want to smooth out all the bugs if any exist.

Still crashes on on a black screen after rebooting.

Omega2058 wrote:Thanks for letting us know about that. Since you made changes, can you try with this installer? I want to smooth out all the bugs if any exist.

Still crashes on on a black screen after rebooting.

Hmmm alright. I'm definitely going to look into this.
Top

It's still far from complete and it'll take a while to reverse everything. But it'll be worth it in the end!