You have questions and can't find another subforum to ask? Go here
Post Reply
220 posts

Following http://wololo.net/2015/06/21/vita-hack- ... -homebrew/ ... everything goes well with installing Rejuvinate with SETUP.bat. I select version 1.06 for unity, and it says "Done with Rejuvinate setup" after setting up the vitadefiler step.

However, when I get to the point of dragging homebrew over "run_homebrew_unity.bat", it kills the psmdevice process, connects to the debugger, and then perpetually waits for a vita connection on the network. Thats it. Nothing else

Notes: PSM for Unity no longer says anything about registration keys. It mentions "no content items are installed" "use the unity editor...".

SETUP.bat says "cannot find appkey" and then says "1 file(s) copied" 3 times, after I insert version 1.06. HOWEVER, the first version I tried WAS 1.00. At this point, SETUP.bat did NOT complain about not finding appkeys. I did install the keys to the PSM publishing utility. All 3 files (key,seed and keyring).

UPDATE: I still can't get anything working. I am not sure if the instructions from the "first run" under PSM+ works before continuing onto the daily run of PSM+. I must mention that the PSM Unity utility mentions that no content exists on the device (implying that its not complaining about keys). Is this a sign that the first-run step is successful?

UPDATE 2: I got everything working

. The problem for me was simple: The installer of SETUP.BAT failed and I had to do a clean purge of my keys and the Rejuvinate zip to start again. The next run it recognized as a first run and I was able to import the keys which [the step] was skipped previously (I never saw the screen).

Cant run rejuvenate or any homebrews for that matter i tried running ball maze demo through my vita while in the unity dev assistant and nothing happened. when i try running hello world all i get is this : [spoiler] 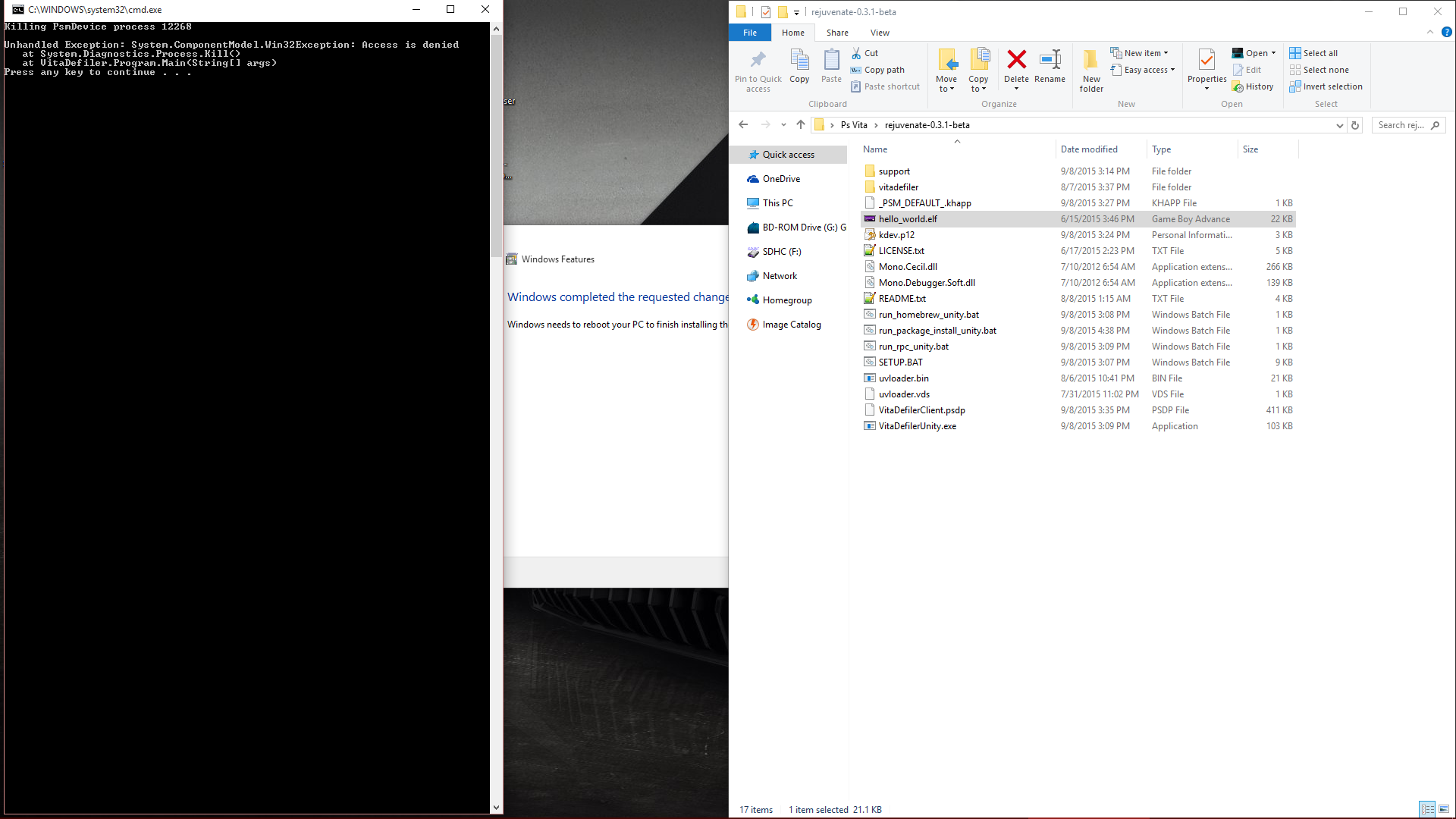 [/spoiler] and i have all the pre requisites, and i ran all 8 of the pictures for the steps, the 2 for unity 2 install the 4 for the license and the 2 daily pics.

the hello world which was failing at beating ASLR just ran succesfully however the mgba emulator fails shortly after the discovered elf file, which i find odd since its a .velf not .elf

i keep getting error (C2-12828-1) whenever u try to install mgba.
a little research digs up "The problems with ftpVita and all the C2-12828-1 are because the version is compiled for PSM DEV. Try using a ftpvita compiled for Unity." so how do we know which work with the unity version?

on that note i do have the unity version working with a single homebrew the realboy_fixup.elf, however its useless without ftpvita and that only runs on regular. my issue now is trying to get the two 2 work at the same time, i broke it trying to do this and it took me about half an hour to fix the lcenses afterwards still only working with unity.
Advertising

I'm on Firmware 2.01
How would I go about getting Rejuvenate on my Vita?
Would I have to update to 3.0x+ or what? I have the uno Exploit currently.
Top

I had a working enviroment, with PSM 1.14 and unity 1.05 licensed from sony.
But can't use these beacuse of the validity check these do once in a while.
Can I use only one file from PSM+ and have my apps enabled again?
Also, I can see Daily and License files from psm+ in my gmail, but in vita only the daily mail is shown. Any setting to change?? Forwarding the mail to the same account works, but is annoying.
Thanks.

PSP-Controlled drone
"Hackers don't have superpowers. Just a hackable PSP and a brain (ships by default on most humans models)" - A famous guy

Hi! Everytime I run a homebrew, I get this error both on PC Client and AndroidDefiler.
It says that the connection couldn't be established because the destination system rejected the conection.
What's happening? Is it something that can be fixed by changing my internet settings? 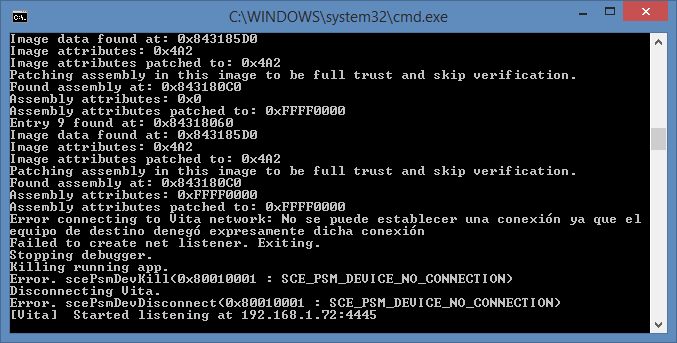 Hello,
help me for installing Rejuvenate.
I don't have game for install psm dev unity.
2: method for access without upgrade firmware and download game?
I have a ofw 4.76 ps3, when transfert ps vita Games automatically included upgrade.
Please help me. Ps Vita 3.50
Thank for all and sorry for my bad english
Top

PSVita: 3.50
PSM Dev Assistant: 1.15
currently using Rejuvenate 0.3.1 and i have all of the retroarch.velf files. however i keep getting this error
"Error parsing script: Could not find file '...\uvloader.vds(whatever .velf i'm trying to load)'."

the only .velf i have managed to get to work is Hello_World.elf and only after trying multiple times with the same error popping up.
Top

PSVita: 3.50
PSM Dev Assistant: 1.15
currently using Rejuvenate 0.3.1 and i have all of the retroarch.velf files. however i keep getting this error
"Error parsing script: Could not find file '...\uvloader.vds(whatever .velf i'm trying to load)'."

the only .velf i have managed to get to work is Hello_World.elf and only after trying multiple times with the same error popping up.

hello, I have tried installing rejuvenate on my vita several times. i have checked the version of all the corresponding software. each time i have followed the tutorials as closely as I could yet when I try to drag the hello world elf onto the application to run it I get a message "package not found" then I get the app close prompt. the elf and the startup app are in the same folder. any idea what im doing wrong? I can give more info on request.
Lenovo ideapad Y510p (Steam: DemonLung0x1a4)
- 2x GeForce GT755m (SLI)