After months of working on this project, I’m now releasing a prototype in order to gather feedback. This homebrew is not a game, or a tool/application, but rather a chapter of a story. I still don’t have a name for this specific chapter, but the name of the story as a whole is planned to be Melody.

Melody has a dark and gloomy theme. Being the first chapter of the story, this homebrew is an introduction that quickly takes the reader through a timeline of events and shows how the protagonist ended up in her current state. Below I’ll leave the story in a spoiler so you can give me your feedback on the story itself, or you can download the whole GBA ROM and give me your feedback on other aspects as well as the story, such as the design, or you can check out both the story in the spoiler and the GBA ROM. In plain text the chapter is roughly 6 paragraphs long. On the GBA this translates to 14 “pages” since I have to squeeze the text in.

There is no sound in this prototype, since I’ve yet to work on sounds. I’ve mainly been working on the programming, graphics and story, while also digging deep for information since this is my first homebrew and I’m using Visual HAM to make it, but documentation relating to Visual HAM is very scarce. I also plan on supporting two languages, English and Spanish, but this prototype only supports English. So, while the Spanish option itself is available in the prototype, if you select it nothing will happen. I also haven’t created a control menu that tells you the controls, but everything is pretty straight-forward except for when you’re in the actual pages, where you need to use R and L to go back and forth.

You can download the prototype here. The story in plain text will be below in a spoiler. Feedback is appreciated. 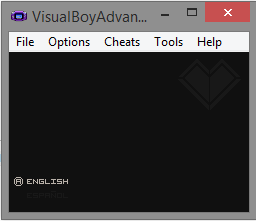 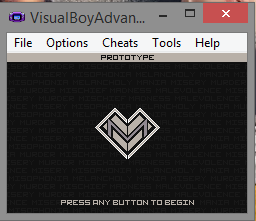 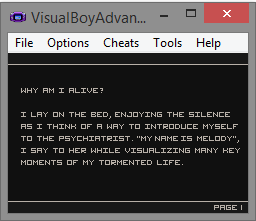 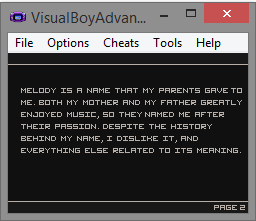 Melody: Chapter 1
Why am I alive?

I lay on the bed, enjoying the silence as I think of a way to introduce myself to the psychiatrist. "My name is Melody", I say to her while visualizing many key moments of my tormented life. Melody is a name that my parents gave to me. Both my mother and my father immensely enjoyed music, so they named me after their greatest passion. Despite the history behind my name, I dislike it, and everything else related to its meaning.

My mother is the one to blame for this chain of miseries...

One day, as I was walking around our store, I accidentally knocked down an expensive guitar off the wall, denting the guitar's body. Being the abusive mother that she was, she started to beat me and call me awful names. As I laid on the ground, dizzy, and bleeding, I noticed a pair of drumsticks close to me. Those were the very same drumsticks that the paramedics had to pull out of my mother's eye sockets after I pushed them through her skull, in act of self-defense. Shortly after the incident, my parents’ shop was closed down, and I was removed from my home by the child protectors due to child abuse and neglect. Then my father died of an illness that he has been carrying since his birth, making me an orphan.

Throughout the time I have been placed in various foster families, none of which have succeeded to understand how I truly feel.

The last “family” that I was a part of was composed of a married couple; an unemployed man and a female nurse. One night, the nurse was away working and I was alone with her husband in their home. I was gazing at the stars from the living room window, when suddenly, the man approached me from behind, and aggressively pulled me down by my hair, making my head hit my head hit the ground once I collapsed. There he whispered disgusting things into my ears, and touched me where no one has ever touched me before.

That last event finished filling my heart with hatred and pain. I was led to confusion, not understanding what I had done to deserve the life that I had. The next day, I saw the nurse and her husband sleeping on the couch in the living room. I stood in front of them, contemplating the man's face, wondering how he could sleep so peacefully after abusing of me. The nurse's face irritated me even more. It was that of an ignorant woman who worked to maintain her pig of a husband. There they both bled to death, after my heart took control. True madness was brought upon them.

I attempted to kill myself after killing the married couple. Too many memories were flashing back and forth. It was just like in my nightmares, though I could only hear my own screams and whimpers, echoing everywhere. My own red blood, dripping off my face and staining the ground, like my past has forever stained my future. I blacked out and came to be in this hospital; apparently this is a hospital for the demented. Here I am again, re-born, yet more dead than before.

Can you show some screenshots? This sounds really interesting
Advertising

I updated the OP with four screenshots. Going from top to bottom, the first one is from the language selection screen. After you select your language (only English is available in the prototype) you're taken to the main menu, which is the image that follows. In the main menu I have the logo which is a heart with an M inside. The heart is born from the metaphorical sense that the heart is the center of emotion, and the "m" stands for more than just "Melody". Behind the heart there are a lot of keywords related to the story which start with "m" as well; misery, murder, mischief, madness, malevolence, misophonia, melancholy, and mania.

After you press a button in the main menu you're taken to the actual story. At first I had a lot of text piled up, but then it seemed sloppy so I used less text per-page and left a double space between words instead of one space in order to make it easier to read.
My Twitter • [3DS] Custom blargSNES Borders • [GBA] Melody: Chapter N
Top
Post Reply
3 posts • Page 1 of 1